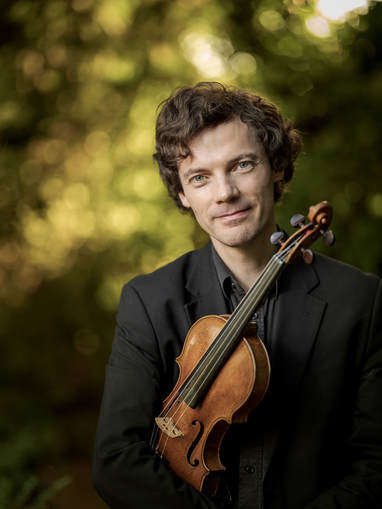 MARCUS BARCHAM STEVENS (violin) first played with the Fitzwilliam in September 2012 and joined them as 2nd violin five months later. He received starred First Class Honours in Music from Cambridge University and the Diploma for Advanced Instrumental Studies from the Guildhall School of Music and Drama, where he studied with David Takeno. He was awarded the Norman-Butler Scholarship from the English-Speaking Union to the Tanglewood Music Center USA, where he was invited back as a Violin Fellow and received the Henry Cabot Award for outstanding contribution. Other honours  include the Harriet Cohen Award and the Donald Wort Prize for performance from Cambridge University.

He has broadcast as a soloist and chamber musician on BBC Radio 3 and live in recital on Classic FM, as well as at the Wigmore Hall and Purcell Room in London (with the Park Lane Group), the BBC Proms, Manchester's Bridgewater Hall, Symphony Hall Birmingham, the International Musicians’ Seminar Prussia Cove, the Library of Congress in Washington, the Haydn String Quartet Festival, Esterhazy, the Opéra Comique, Paris, and for several years at the London BMIC Cutting Edge Series. Marcus held the position of Principal First Violin with the City of Birmingham Symphony from 2000-2002, and also has played as guest Principal 2nd Violin for the English Chamber Orchestra, the Scottish Ensemble, and Sir John Eliot Gardiner's Orchestre Révolutionnaire et Romantique (at the Opéra Comique, Paris). He has also guest led Ensemble Modern Frankfurt, Musikfabrik Köln, City of Birmingham Symphony Orchestra, Royal Liverpool Philharmonic Orchestra, Birmingham Contemporary Music Group, Aurora Orchestra, the Opera Group, the National Youth Chamber Orchestra, the Tanglewood Music Center Orchestra USA, and the Cyprus State Orchestra. He has recently been appointed co-leader of the Britten Sinfonia, and principal 2nd violin in the Scottish Chamber Orchestra.

He is a member of the chamber ensemble Chroma (with whom he has played for over 10 years), Ensemble Cymru, and the contemporary ensemble Plus-Minus. Marcus also performs in recital with his wife, pianist Christina Lawrie – they have appeared in both England and Scotland, and have also performed together in lecture recital. As a composer his “Dhyana” for soprano and ensemble was described by George Hall (the Guardian) as “hugely impressive”, and he was a finalist in 2012 in the New Music for St. Paul's Cathedral competition. His most recent works have been a series of five fantasias for string quartet, after Henry Purcell. He was Collard Fellow from the Worshipful Company of Musicians and is now a Freeman of the Company. He has run a Strings and Piano Composition project at the Guildhall School, which combines student composers, pianists and string-players in new pieces, and has coached at the Baltimore School for the Arts, as well as the Apple Hill Center for Chamber Music in New Hampshire USA, for players of mixed ability and teenagers from deprived US inner cities. With the ensemble Chroma, he has been involved in substantial education projects in schools in Spitalfields (London), Norwich, the Shetland Islands, and Norway, and with BCMG in Birmingham.
​
www.marcusbarchamstevens.co.uk