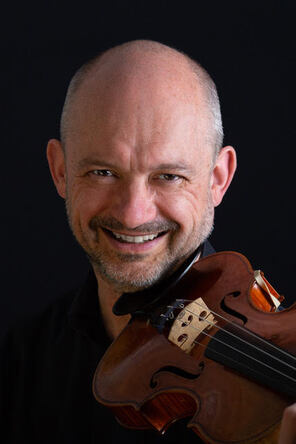 ANDREW ROBERTS (violin) has been known to the Fitzwilliam players for many years – and first teamed up with them in July 2019, taking part in a performance of the Mendelssohn Octet, and thereafter as second violinist during the periods before, during, and after the various Covid lockdowns. Andrew comes from a highly distinguished dynasty: his father was the great pianist Bernard Roberts, and his brother Nicholas is cellist of the Coull Quartet; for over fifteen years they played together in the Bernard Roberts Piano Trio, releasing recordings of music by Frank Bridge and Stephen Dodgson to critical acclaim. A founder of the Chamber Orchestra of Europe and long-time member of the Orchestra of the Age of Enlightenment, he is equally at home in the 'modern' and the ‘historically informed’ musical worlds. An experienced chamber musician, he was a member of the Auriol Quartet, and has been a guest of many ensembles such as the Dante and Salomon Quartets, Lontano, and Hausmusik, and also has an ongoing duo partnership with pianist Rachel Fryer.

Andrew is delighted to have been appointed recently as second violin in the Fitzwilliam; and, despite all the months of inactivity, his new colleagues were no less thrilled when he agreed to become a member of the quartet in May 2021.