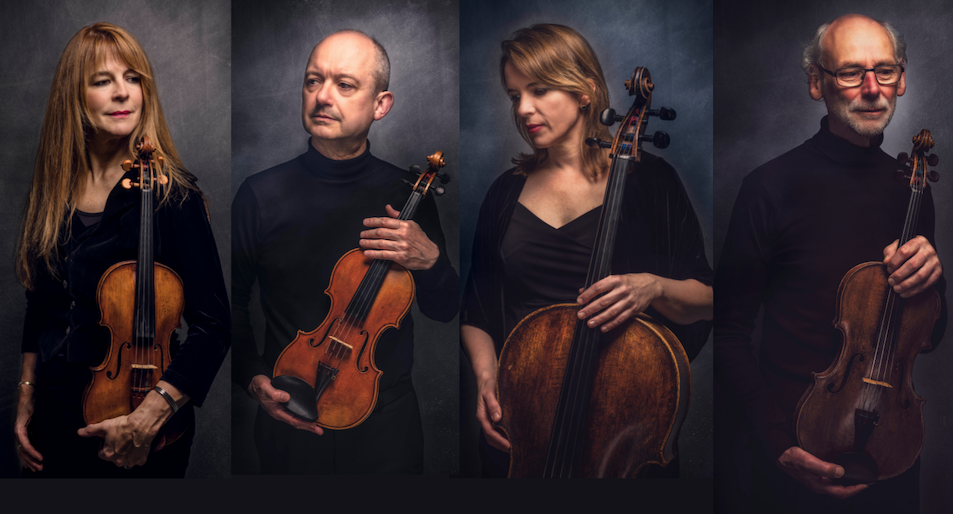 The Fitzwilliam is now one of the longest established string quartets in the world: founded in 1968 by four Cambridge undergraduates, the group quickly achieved international recognition as a result of its members’ personal friendship with Dmitri Shostakovich and their subsequent championing of his string quartets following his death. He entrusted them with the Western premières of the last three, and before long they had become the first ever group to perform and record all fifteen. These discs, which gained many international awards, secured for them a worldwide concert schedule and a long term recording contract with Decca. Whilst the FSQ’s pre-eminence in the interpretation of these works has persisted, the authority gained has also been put at the service of diverse other composers, from the late 17th century to the present day. It remains one of the few prominent quartets to play on historical instrument set-ups, but has simultaneously brought about the addition of nearly 60 new works to the repertoire. Its involvement in 2013 with celebrating Britten's anniversary, and before that the chamber works of Delius and Grainger, are but two recent manifestations of the players’ enthusiasm for using anniversaries to promote less familiar music – following Vaughan Williams in 2008: thus it would appear that England is gradually taking its place alongside Russia and Vienna as a principal area of speciality, while in 2015 they looked further north, to honour the joint 150th birthdays of Glazunov, Sibelius and Carl Nielsen.

The last few years have witnessed an increase in the their presence on the British festival scene, with invitations from Petworth, Three Choirs, Leamington, Buxton, Ryedale, City of London, Fishguard, Swaledale, English Haydn, Beverley Early Music – during which time they have also been granted their very own chamber music festival in the prestigious “town of books” – Hay-on-Wye. Similarly, they have become more prominent once again in London, notably at King’s Place, Conway Hall, and St John’s Smith Square.
​
​BEGINNINGS
​
The founding members of the FSQ first played together as undergraduates during their inaugural term at Cambridge University in autumn 1968. Their first concert appearance took place in Churchill College, Cambridge the following March, before their public debut at the Sheffield Arts Festival in June. After graduating in 1971 they accepted their first professional appointment, as Quartet in Residence at the University of York, following the eminent Amadeus Quartet.  There, the group built a niche for itself in concert venues around Yorkshire and the rest of the United Kingdom. The FSQ was one of many quartets to have emerged under the guidance of Sidney Griller at the Royal Academy of Music during their residency at York University. ​
SHOSTAKOVICH 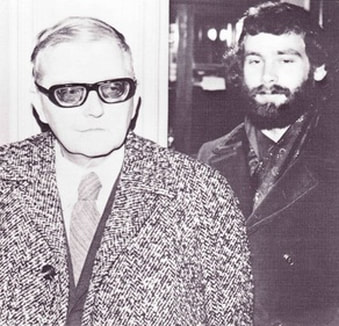 Dmitri Shostakovich with Alan George, 1972
It was only a year into their residency at York University that the much documented association with  Dmitri Shostakovich first catapulted the Quartet into the public eye. The composer travelled to York  to hear the British première of his thirteenth quartet and this musical friendship (the composer’s own word!) prospered through correspondence, and the presentation of his final two quartets that he wrote in the years following. A planned visit to spend a week with the composer in Moscow however, was abandoned when he died in August of 1975.  Benjamin Britten afterwards reported (just before his own death) that Shostakovich had told him the Fitzwilliam were his “preferred performers of my quartets”. Having premiered his last three quartets in Britain, the group soon became the first ever to record and perform all fifteen quartets; complete cycles were given in a number of major centres, including London, New York, and Montréal.
​​
RECORDINGS

The Shostakovich recordings (now reissued for a third time) gained many international awards  including the very first Gramophone Award for chamber music in 1977 and inclusion in Gramophone  magazine’s “Hundred Greatest-ever Recordings” (November 2005). The recordings secured  a world-wide concert schedule and a long-term contract with Decca.  All the recordings from that era are now available again on Decca's “Eloquence” label. The Quartet’s collaboration with Linn Records began in 2000 with Haydn’s Seven Last Words followed by critically acclaimed recordings of the Brahms clarinet quintet (with Lesley Schatzberger) and Vaughan Williams’s On Wenlock Edge (with tenor James Gilchrist and pianist Anna Tilbrook), the latter a  2008 Gramophone Award finalist.  A live recording of  Haydn's Quartets Opp.1 No.6, Op. 71 No.2,  and Op. 77 No.2  made in 2001  was recently reissued by the Divine Art Records label. In 2012, the FSQ recorded the complete quartets of eminent geologist John Ramsay, CBE. In 2014,  Absolutely! for string quartet, jazz violin and saxophone was released after a successful Kickstarter crowd funding campaign. This Jazz fusion album of music by German composer Uwe Steinmetz also features the Grammy-award winning violinist Mads Tolling. In 2015, the FSQ collaborated with the St Salvator's Chapel Choir and director Tom Wilkinson on Salvator Mundi: The Purcell Legacy (Sanctiandree Records). 2016 saw Bruckner’s String Quartet and Quintet with James Boyd, viola (Linn Records). A more recent release has been a double disc of chamber music by British composer Liz Johnson, now followed by the 50th anniversary discs of Shostakovich and Schubert, as described on the Home page.
​
REPERTOIRE, OLD & NEW

The FSQ is proud of its reputation for exploring less familiar repertoire, something that can give its concert programmes and discography a recognizably unconventional look. It has always been enthusiastic about promoting music of its time and the hotbed of new music at the University of York proved an inspirational starting point in its early years. Later, it was the University of York's reputation for historical performance studies which encouraged the group to perform its earlier repertoire on period instruments.  More recently, as part of its 40th anniversary celebrations, the FSQ invited a number of composer friends to contribute to a series of new fantasias along the lines of those by Henry Purcell.  This included Jeremy Thurlow, Jackson Hill, Carolyn Sparey, Duncan Druce, Liz Johnson, Uwe Steinmetz and most recently, since 2015, five fantasias by Marcus Barcham Stevens, the FSQ's former second violinist! The extensive list of other composers with whom the FSQ has worked can be viewed in Repertoire.
RESIDENCIES 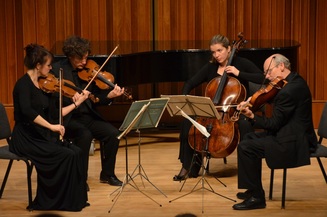 Bucknell University, Lewisburg, PA, 2013
Having succeeded the Amadeus Quartet at the University of York in 1971, the FSQ remained there, apart from a three year interlude at the University of Warwick (from 1974 to 1977) until 1986, enabling them to concentrate full time on quartet and academic work.  In 1978 their university connections were extended to the USA, where they became Affiliate Artists at Bucknell University in Lewisburg, Pennsylvania.  Their achievements were recognized there through Honorary Doctorates of Music conferred in 1981 by Shostakovich’s son, Maxim.  In 1999, the FSQ began its ongoing residency at Fitzwilliam College, University of Cambridge.  More recently, it has begun a visiting Residency at the University of St. Andrews, Scotland, where in addition to concert recitals, teaching responsibilities include a new chamber music course, Strings in Spring.
​STOP PRESS: new Residency at Clare Hall, Cambridge
TOURING 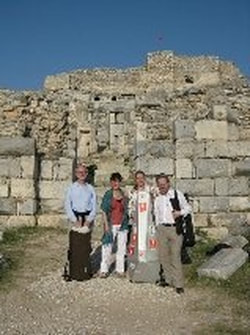 Athens to Istanbul tour, 2008
Highlights over the past few years have included participation in the making of an international dance film in Munich. There, the FSQ played music from the  last three Shostakovich quartets; the choreographed dance featured a Japanese dancer and an Austrian poet. The FSQ has also made bi-annual visits to St Petersburg, Russia, where concert venues included the the Rimsky-Korsakov St Petersburg State Conservatory, Pushkin's House, the Sheremetev Palace, the Summer Palace at Peterhof, and Agora, the former home of Modest and Pyotr Tchaikovsky.  For most of its career the FSQ has made regular trips to the USA, where latterly it performed in Lorin Maazel’s private concert hall at his farm in Virginia.  In 2008 the FSQ played for the first time in Newfoundland amid mid-winter snows, performing there again in 2012 at the Tuckamore Music Festival in St. John's and in 2015 at the Wintertide Music Festival in Corner Brook. The FSQ has featured at several Martin Randall Travel concert venues, including the complete Haydn Strings Quartets at Taunton in 2009 and two archaeological cruises from Athens to Istanbul when they performed in a number of ancient amphitheatres including that at Ephesus.  Recent overseas ventures have taken the group to Italy and South Africa, where they played concerts in Cape Town and Pretoria, and recorded works by the Cape composer Michael Blake.  They have since performed at the Chateau Bourglinster in Luxembourg and in Israel for the Eilat Music Festival.